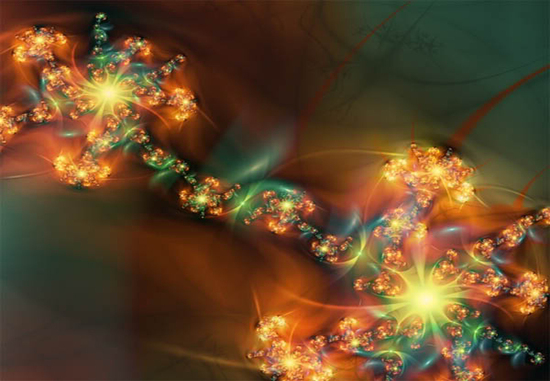 ABSTRACT: In nonunitarian, discontinuous transformations, a system opens itself to novelty and potentiality by dissolving into a state of nonlocal communion with the whole and reforms unconditioned by the past.  Nonunitary transformation is based in the dissolution of all forms and structures, and creative emergence of unconditioned creativity--metamorphosis.  In this organic model of multiple universes and states of consciousness, everything is involved in a pattern of continuous rebirth, and everything is the manifestation of the underlying creative potential, transcending physical and spiritual boundaries.

Evidence provided by anthropology, psychotherapy, experimental psychology, and common human experience strongly suggests that the capacity for imagery is species wide and that human adults have a continual, night-and-day stream of it, to which they may or may not attend.  --Michael Murphy, THE FUTURE OF THE BODY

The perfection of that which rests in itself in no ways contradicts the perfection of that which circles in itself.  Although absolute rest is something static and eternal, unchanging and therefore without history, it is at the same time the place of origin and the germ cell of creativity.  Living the cycle of its own life, it is the circular snake, the primal dragon of the beginning that bites its own tail, the self-begetting Ouroborous.  --Erich Neumann, ORIGINS AND HISTORY OF CONSCIOUSNESS

The postmodern era has seen the fall of the modern notion of a mechanistic personality living within a clockwork universe.  The reification of a single, stable unified self was deified in monotheistic cultures.  But in our current pluralistic society, we find expression through a number of "selves" within each context or event. The romantic tradition of a profound and stable center of identity has given way to a functionalist dynamic image of self as multiple shape-shifting identifications.

A deeper truth of our culture is that we have come to "worship" many gods, giving attention to diverse and contradictory aspects of ourselves.  But we have retained the romantic notions that powerful forces lie buried deep within the psyche, such as passion, inspiration, creativity, even madness. The pragmatism of modern life leads to excessive demands for attention to deal with the here and now of ordinary consciousness.

To survive in the complex world, we may have narrowed our self image, perceptual continuum, and sense of potential.  As a cultural movement, modernism is crumbling.  It is being replaced by a perhaps even more skeptical distrust of all metanarratives for describing the nature of reality.

Gergen (1991) lists such reasons as "populating of the self, demands of multiple audiences, and repetition of images" as factors which reinforce the postmodern notion of multiple selves or systems operating within each individual. In contemporary society we play many roles, wear many hats during any given day.  Simple roles are no longer adequate "containers" for self.  We reveal ourselves through different social masks and by expressing different facets of ourselves in different relationships. The notion of "authenticity" gives over to that of relativity.  Being "romantic" or "functionalist" become ways of participating.  Our uniqueness is not self-determined but reflects the patterns of our relationships, and the deep context in which they occur.

Creative Consciousness Process is a postmodern psychotherapy, which operates on the premise of following nature's processes, rather than a mechanistic model of cosmos and human beings.  The organic process of natural unfolding is one of order emerging from chaos and recycling back into chaos through the de-structuring or deconstruction via the flow of creative regression. The centroversion of a strong ego may have been the psychological goal of the past, but the cultural mandate is now one of radical pluralism, identification with a multiplicity of views.

Creative regression is neither a fragmentation nor shattering of the ego into disparate parts.  Rather, in CCP, it is a "guided tour" of the myriad of potentials for being from the most embryonic forms of consciousness to the most complex.  Ego consciousness is superseded in favor of an animated realm of infinite possibility. When the unifying perspective of the ego reaches its apex and decline, it needs to be renewed through immersion in radical multiplicity, dissolving its boundaries to experience that greater than itself.  Ego returns to the unconscious, voluntarily dissolving into its underlying essence.  This immersion is like a baptism, a renewing bath in unfathomable holy waters--unimaged wholeness. CCP is empirical in the sense that it is based on observation of psyche's phenomenal display.  But it is a participatory, rather than an "objective", experiment.

The process is guided by experience and theory, but CCP was not constructed from any original theory of consciousness.  It emerged from spontaneous deepening of experiential psychotherapy.  CCP uses a stratified map of consciousness which helps the guide orient within the phenomenology of the process. It is "reductionistic", not in the sense of reducing the whole to its parts, but of reducing manifest imaginal phenomena down to creative essence--reducing all psychic material to its primal elements.  It draws its legitimacy from "functionalism"; it works, consistantly facilitating emergent forms of creativity and healing.  Thus, CCP fulfills its intentionality. In terms of physics, we can view CCP as analoguous to the eternal flux of implicate (nonmanifest, enfolded) and explicate (manifest, unfolded) realities.

CCP is phenomenological because it deals with events--phenomena--as we directly experience them and interpret them. In the human psyche, this process manifests as the upwelling spring of emergent imagery which conditions our entire perception of reality.  The so-called stream of consciousness flows through all manifestations of phenomenal existence, conditioning it with its dynamic global imprint, a universal pool of active, intentional, evolutionary information.

The flow of psychic energy carries the deep context of the whole.  This emergent flow of deep context embodies meaning.  Therefore direct perception of meaning is inherent in participation within this flow. Most of the time we ignore this "window" on our psychic processes.  But we can enter this imaginal world within the context of experiential psychotherapy.

Philosophers such as Hegel and Bergson have spoken of this intrinsic ability which CCP evokes and facilitates. Experience has subjective connotations which imply participation in the cycle of immersion and reflective release; a nonreflecting experience of giving up of self and volition to the flow.  In the therapeutic context, the consciousness journey provides a ritualistic structure for the process of letting go of ordinary identifications of self and world.

Therefore, this surrender/subjugation of the self to ritual and flow is a prelude to increased freedom through ritual.  Immersion paves the way for empowered emergence.  The process becomes a communion, the ritual form of which is constituted by consciousness, being led along by itself, engrossed and carried along in suspense--suspension of self--within the scintillating context of the whole.

The creative flow of meaning is facilitated by intentionally turning attention toward imagery.  The stream of consciousness can become accessible through the faculty of introverted intuition.  In his early work, Bergson emphasized the immediate, nonconceptual character of intuition.  He emphasized it as a direct participation in, or identification with, what is intuited. In self-referential processes intuition is an immersion in the indivisible flow of consciousness, a grasp of pure becoming.  Ultimately, unlike the relative knowledge of intellect which remains detached from its objects, intuition enters into what it knows, dispensing with symbols (Murphy, 1992).

By recycling our consciousness, we feed these emergent images back into the system, amplifying certain patterns.  The amplification is reflected in subsequent emergent imagery. Intentions act like magnetic fields, moving attention toward some objects and away from others, keeping our mind focused on some stimuli in preference to others (Csikszentmihalyi, 1990).

Each image contains the gestalt of an individual's existential condition, encoding all potentialities and limitations simultaneously.  Like fractals, each image contains a certain self-similarity with others, reflecting all levels of organization. The whole is contained in the part; the entire therapeutic "problem" is implied within any discrete image.

Each image emerges from the creative context which links all events, real and imaginal--the underlying destructured phenomenal field--a meaningful void. Consciousness is patterned by self-referential circular (non-linear) causality: consciousness shapes the self and is in turn unpredictably shaped by it.  It conjures the image of the serpent Ouroborous, eating its own tail.

In the self-referential imagery process, images are fedback, or recycled, into consciousness. Disorder, or conflicting information and intentions in the psyche, include pain, fear, rage, anxiety, etc.  In consciousness journeys, the guide is always open to sensing the nature or essence of the dis-ease, what shape or form the obstruction to flow takes. Instead of attempting to harmonize, "work through," or order these disorderly systems, CCP intentionally amplifies them through feedback, then de-constructs them by adventuring further into their depths--into chaos--the organic transformation process which then creatively re-patterns the liberated energy locked up in their expression.

As we follow the stream of consciousness back to its source of emergence, many typical phenomena appear.  Raw, archetypal energy is conditioned in its appearance on discrete levels of organization.  As consciousness seeks form, it is channeled and patterned first by archetypal and mythic dynamics, which constitute the deeper strata of the psyche.  These are archetypal states of consciousness. It is also conditioned to the extent that it encounters resistance to its free flow.

The obstructions it encounters in the personality strata of psyche are psychophysical blocks composed of "frozen consciousness," held osified by the forces of repression.  They are the result of interaction of self and environment--existential obstructions within the flow of manifest and nonmanifest energy, resulting from trauma.  These states of consciousness appear in a virtually unlimited number of idiosyncratic forms.

Particularly in youth, trauma leads to the mobilization of defense and survival mechanisms.  Later, these become power struggles, problems in our relationships to self, others, and the environment--blocks in the flow of relationship. One of these primary defenses is the reconstruction of one's sense of boundaries--one's primal sense of self within this world.

Under the chaotic threat of traumatic events, we constantly redraw our boundaries in an attempt to preserve the sanctity of self.  Various defenses invoke the actualization of different potentialities for survival.  These defenses tend to persist into adult life, long after the immediate threat is gone. Maladaptive coping mechanisms obstruct the free flow of psychic energy, or libido.  The obstructive patterns are the source of our psychophysical dis-ease, and may be de-constructed through CCP.

Following the stream of consciousness into deeper strata of the psyche, into more primal and fundamental states of consciousness, allows the old forms to dissolve.  Dissolving all boundaries in the journey, we become open to re-patterning by the creative source. In CCP, we follow the natural unfolding of imagery quite closely, generally choosing to guide the journey toward a more deeply enfolded domain of experience.  Each transform of image is virtually a different state of consciousness, as identification migrates through forms and patterns.  The metamorphosis may be smooth--"morphing"--or discontinuous.

Morpheus, the maker of forms was also the god of dreams, according to Ovid. Unitary consciousness is just one example--a special case--of nonunitary consciousness.  Discontinuous, or nonunitive transforms are separated by transitive states which are often blank or void of perceptual content.  These microstates may allow repatterning of each transform by global intentionality.  Integral practice in CCP reveals that each transform also manifests in the physical body.  Each tranformative practice has physical effects.

Copyright © 2010-2013 Iona Miller, All Rights Reserved.
FAIR USE NOTICE
This site may contains some copyrighted material which has not been specifically authorized by the copyright owner. We are making such material available in our efforts to advance understanding of environmental, political, human rights, economic, democracy, scientific, and social justice issues. This constitutes a 'fair use' of any such copyrighted material as provided for in section 107 of the US Copyright Law, in accordance with Title 17 U.S.C. Section 107. The material on this site is distributed without profit to those who have expressed a prior interest in receiving the included information for research and educational purposes.